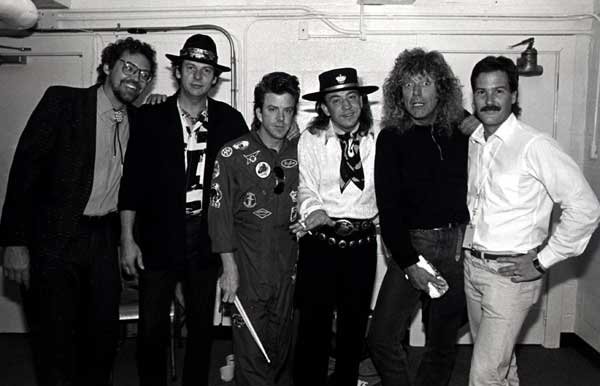 Exclusive: Stevie Ray Vaughan's bandmate shares candid behind-the-scenes photos
FacebookTwitterEmail
1of30
This was when we toured with Robert Plant. Great tour. I always loved Led Zeppelin. They were one of the greatest bands ever. In 1969, when I was playing with Johnny Winter, we played several shows with them. They were unbelievable!  The guy on the far right with the mustache was our Tour Manager, Skip Rickert.  (If you're wondering why Robert Plant has that terrified look on his face, it’s because Stevie is giving him a wedgie.)
[Editor's note: Tommy says Stevie did not really give Plant a wedgie. J/K Robert!]David BetitoShow MoreShow Less