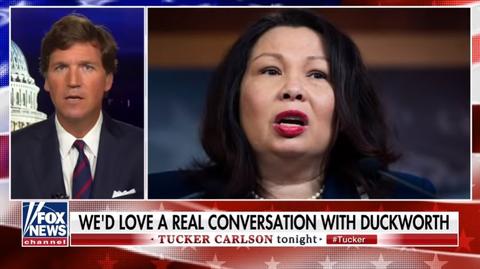 Font Size
New York Times reporter Reid Epstein wept on Thursday over the “nativist smears” poor Sen. Tammy Duckworth (D-Ill.) was force to endure at the hands of popular Fox News Channel host Tucker Carlson. Duckworth is a possible vice-presidential pick of Democrat Joe Biden in his bid to oust President Trump.
Hmm. Given the left’s -- and the
-- clear disdain for founding patriots like George Washington and Thomas Jefferson, why would they assume “questioning patriotism” is a bad thing? What liberal Democrat would want to be accused of patriotism these days?
Senator Tammy Duckworth of Illinois, a Thai-American Democrat who lost both of her legs fighting in the Iraq war and is now a potential vice-presidential nominee,