Narayana puchama : Live Updates Every Minute from 25K+ News Agencies Across the Globe 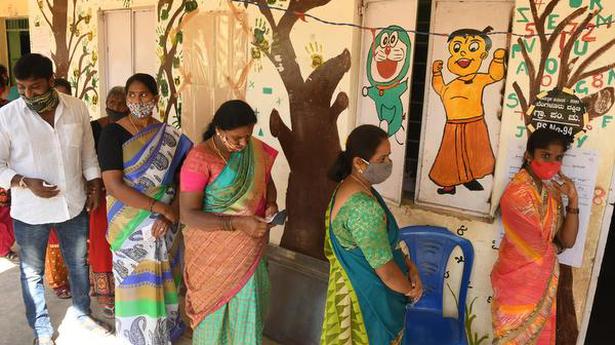 Gram panchayat elections conclude peacefully in Karnataka
Updated:
Updated:
Share Article
AAA
People waiting to vote in the GP polls at Ramasandra in Bengaluru Rural district on Sunday.
| Photo Credit: Sudhakara Jain
Barring a few instances of technical delay, disturbance at polling stations, and poll boycott, the second phase of the gram panchayat elections in the State concluded peacefully on Sunday, with a good turnout reported.
The second phase saw one poll postponement owing to error in ballot paper. In Belagavi district, during polling in Kadampur Gram Panchayat in Ramdurg taluk, it was found that the symbol of a candidate was printed wrongly on the ballot paper. Commotion prevailed for a while and subsequently, polling was put off to Monday. A similar case was reported in Mattihalli Gram Panchayat in Harapanahalli taluk of Ballari district, where voters boycotted polling for the same reason.