Narayanan nair : Live Updates Every Minute from 25K+ News Agencies Across the Globe

'Theeyoor Chronicles': Why are there so many suicides and disappearances in the land of fire? N Prabhakaran.
Vellen was a wanted man with a price on his head. In 1925, a policeman by the name of Chandu shot him dead. He was fifty-four or fifty-five years old at the time. His oldest daughter, Manikyam, was twenty-nine, and her mother, Muthamma, was forty-seven. Muthamma was not Vellen’s wife but a woman he had kidnapped, and she was the reason he had come to Theeyoor. He had seen her for the first time in Aamachal, on his way back from breaking into the house of a man named Ambunair in Kuniyankunnu.
In those days, in the month of Meenam, a party of Kodagu traders would come to Aamachal with rice, chillies and various forest produce, and camp at the inn belonging to the Valyejamanan – the feudal landlord – of Aamachal. Vellen had seen a light in the lean-to behind the inn and had gone to investigate, even though he knew that such curiosity, especially after committing a big burglary, was not advisable. But he had not been able to resist the urge. Something or someone had pulled him towards the light. 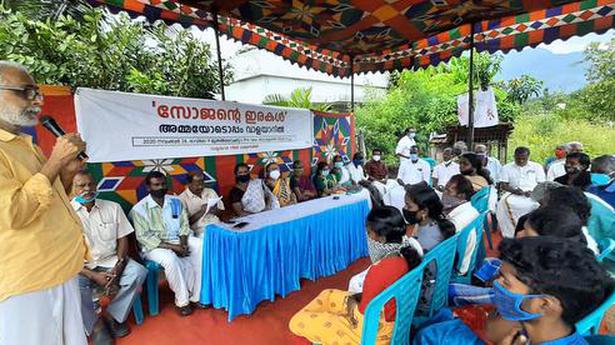 Updated:
They express solidarity with the parents of Walayar girls
Share Article
AAA
Rights activist C.R. Neelakandan introducing the persons who had been allegedly victimised and denied justice by Dy.SP M.J. Sojan at a meeting in Walayar on Saturday.

They express solidarity with the parents of Walayar girls
A meeting of persons who had been allegedly victimised and denied justice by Dy.SP M.J. Sojan in various cases have resolved to fight it out together until the police officer is punished.
The meeting held at Walayar, near here, on Saturday expressed solidarity with the parents of the Walayar girls fighting for justice. Calling themselves as “victims of Sojan”, the group said they would stand united to ensure that the Walayar girls got justice.

11 more projects cleared
Updated:
Updated:
Share Article
AAA
The 11th meeting of Board of Directors of Tirunelveli Smart City Limited has cleared 11 more projects to be implemented here on an outlay of ₹ 89.59 crore.
The meeting, chaired recently by its Chairman and Commissioner for Municipal Administration K. Bhaskaran, cleared the proposals including installation of two solar power plants with the cumulative capacity of 5 MW.
One of the major proposals cleared was deepening and beautification of NGO Colony Periyakulam, which was desilted by locals with a contribution of ₹ 12 lakh a year ago on an outlay of ₹ 6.70 crore, and construction of washermen ghat at Vannarpet and Karuppanthurai at a cost of ₹ 4.20 crore.

KMPA inaugurates its golden jubilee celebrations
Kerala Master Printers Association (KMPA) inaugurated its golden jubilee celebrations on 4 January 2020 in style at The Renai Cochin in Kochi.
Felicitation of AIFMP President and Vice President
Dibyajyoti Kalita, president of the All India Federation of Master Printers (AIFMP), was the chief guest of the evening, while Sarada Rajendran, wife of late M Rajendran, founder president of KMPA was the guest of honour.
In his address, O Venugopal coordinator of KMPA expressed his gratefulness to the guest of honour for attending the event despite ill-health, and blessing the gathering.
Speaking at the event, C Ravinder Reddy, vice President (south) of AIFMP, emphasised on the motivation given by KMPA to improve the printing processes in Telangana, through Telangana Offset Printing Association. He also stressed on KMPA’s support in educating the printing students in the region.

Board Of Directors Tirunelveli Smart City