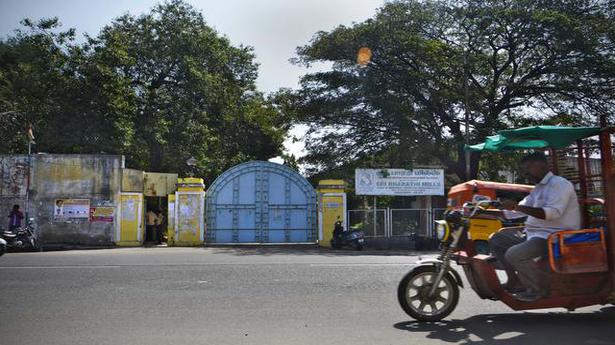 A view of Sri Bharathi Mills on Cuddalore Road in Puducherry   | Photo Credit:
S.S. KUMAR
An official said the move had been contemplated for quite some time as the mill’s accumulated losses had touched ₹123.12 crore
Even as the Narayanasamy-headed Congress government is making a move to prevent the closure of the century-old Anglo French Textiles (AFT) mills, the Industries Department has announced a six-month lay-off in another old textile mill -- Sri Bharathi -- causing concern among its 200 workers.
According to an official, “The move had been contemplated for quite some time since the accumulated loss of the mill had touched ₹123.12 crore. A techno-economic study of Bharathi Mills conducted by the South India Textile Research Association (SITRA), Coimbatore, had concluded that the mill is beyond any kind of financial revival.” The machinery in the mill is old and has to be replaced completely. The buildings are more than 100 years old and therefore, to house the new machinery,e new buildings have to be constructed by demolishing the old ones, the official said.