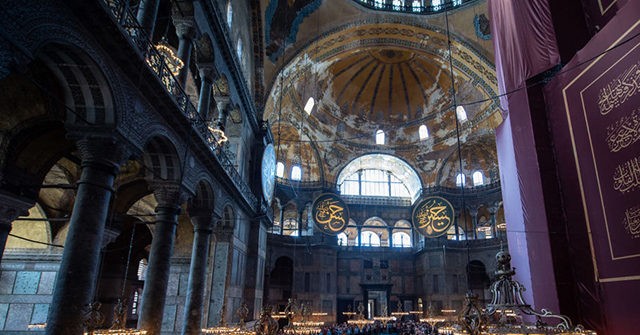 24 Jul 2020
Islamist Turkish President Recep Tayyip Erdogan confessed on Friday, attending the first Islamic prayers at the Hagia Sophia in 86 years, that converting the ancient Christian cathedral to a mosque was his childhood dream.
The Hagia Sophia was built in late antiquity as a Byzantine cathedral and enjoyed nearly a millennium as one of the holiest sites in Christianity. When the Ottoman Empire conquered Constantinople in 1453, the victors converted the building into a mosque, which it remained until the founding of the Republic of Turkey in the early 20th century. The Hagia Sophia functioned as a secular museum until this month when Erdogan’s government announced it would return to being an Islamic center.