ALLEN PARK, Mich. – As the legal tampering period begins within the NFL on Monday and teams can finally start to make more concrete plans to be on their roster, the turnover churn that will be the Detroit Lions can take some shape.
The Lions are not expected to be massive players in free agency due to a multitude of factors, including cap space, the reality of a rebuild and new general manager Brad Holmes’ stated plan he would prefer to build within the draft.
But Detroit does need players – the team, in reality, has either starting or depth questions at every position other than punter – and some of those solves will come from free agency. The Lions’ own free agents may take up some of those moves, as the team has already re-signed cornerback Michael Ford, and they’ve been active in the cut-player market, signing receiver Tyrell Williams.

Why T.J. Hockenson figures to be a big part of the Detroit Lions offense in 2021

ALLEN PARK, Mich. – Anthony Lynn has still been settling into his role as the Detroit Lions' offensive coordinator, but he’s already seen enough of one of his future players to get a sense of how good he can be.
Lynn has spent time digging into the game of Pro Bowl tight end T.J. Hockenson, who had 67 catches for 723 yards and six touchdowns last season. Lynn believes Hockenson will continue to grow, an ascent that already has made him one of the NFL’s Top 10 tight ends.
“T.J. did some nice things last year and I think his ceiling is even higher,” Lynn said. “I know he made the Pro Bowl and all that, but he can play even better and that was the encouraging part. I like what I saw on tape.”

Trading Stafford offers Holmes more options in 2022 and 2023, and perhaps a stop-gap quarterback for the time being.

ALLEN PARK, Mich. -- Quarterback Matthew Stafford gathered his team in a huddle before its Week 17 home game against the Minnesota Vikings, doing what he had done so often before in his career with the Detroit Lions. As he did, it’s not clear if he knew this would likely be his last game in Detroit.
“Whatever you got left in the f---ing tank today, let’s go,” Stafford said in a video published later on the team website.
QB Matthew Stafford urges on his teammates in Week 17 pic.twitter.com/3c4Qx7e— Detroit Lions (@Lions) Jan. 3, 2021
It felt like that’s what Stafford did in Detroit: He made the Lions competitive. Every game, every season, he gave Detroit everything he had. You saw it in his battered body, with busted-up fingers, a broken back on more than one occasion, bruised ribs and massively taped ankles.

Stafford will leave Detroit as arguably the best quarterback in the franchise's history. But Lions fans will remember him as a down-to-earth person.

The Lions' new head coach wore his feelings on his sleeve and vowed his team would reflect the city's personality.

With Sheila Ford Hamp in the mix, the Lions' exhaustive GM search has them feeling like they got their man in Holmes.

Best fit for Chiefs OC Eric Bieniemy? A look at the five teams with which he's interviewed

He'd rank his latest candidate, offensive coordinator Eric Bieniemy, with any of them.
"I have not seen many guys that are as great a leader as he is of men," Reid said this week. "In this business, that's huge. You're never going to have to worry about Eric Bieniemy -- never -- on the field, off the field. He's going to be honest with you and straightforward, and then he knows the offense."
That would be a Chiefs offense that has ranked first in the NFL in two of the past three years.
This week, while the Chiefs enjoyed a first-round playoff bye, Bieniemy interviewed with five of the six teams needing a head coach: the Atlanta Falcons, Detroit Lions, Los Angeles Chargers, Jacksonville Jaguars and New York Jets.

Two-time NFL Defensive Player of the Year Aaron Donald, 2017 NFL Offensive Player of the Year Todd Gurley II and two-time Pro Bowl quarterback Jared Goff are among notable selections Holmes helped oversee.
Recently, as the Rams have gone four years without a first-round pick, Holmes has helped identify mid-to-late-round selections that have played prominent roles, including safety John Johnson III, tight end Tyler Higbee and safety Jordan Fuller.
Holmes, who turned 41 in July, has the support of many within the Rams organization, where he has made an impact beyond roster construction.
"He's become a valued voice in our organization as part of our leadership team on social justice and diversity issues, helping us lead a diverse group of people," Rams chief operating officer Kevin Demoff said. "Brad is one of the more valued voices we have in our building."

ALLEN PARK, Mich. -- Kerryon Johnson knew all about Bo Scarbrough well before the free-agent running back ever ended up with the Detroit Lions in November.
Like many football aficionados -- Johnson was familiar with Scarbrough for a long time, as far back as when Johnson was in high school in Huntsville, Alabama. There, Johnson, who would sign with Auburn, learned about the legend of Scarbrough from the recruiting circuit, when he was a five-star prospect who landed with the Crimson Tide.
Get the best of ESPN sent to your inbox The ESPN Daily delivers the biggest sports news and moments every weekday.

Lithoquest Diamonds Inc.: Lithoquest Diamonds Announces Microdiamond Results from the 1805 & 1826 Kimberlites
VANCOUVER, BC / ACCESSWIRE / January 14, 2020 / Lithoquest Diamonds Inc. (TSXV:LDI) ("Lithoquest", or the "Company") today announced that it has received results from microdiamond analysis of the 1805 and 1826 kimberlites discovered in 2019 during the Company's second drill campaign on its 100% owned North Kimberley Diamond Project in Western Australia. No diamonds were recovered from either kimberlite.
Reverse circulation drill cuttings were collected at one metre intervals from each body. Nine samples from the 1805 kimberlite weighing a total of 145.4kg and four samples from the 1826 kimberlite with a total weight of 43.6kg were submitted to a Perth based laboratory for diamond and indicator mineral analysis. 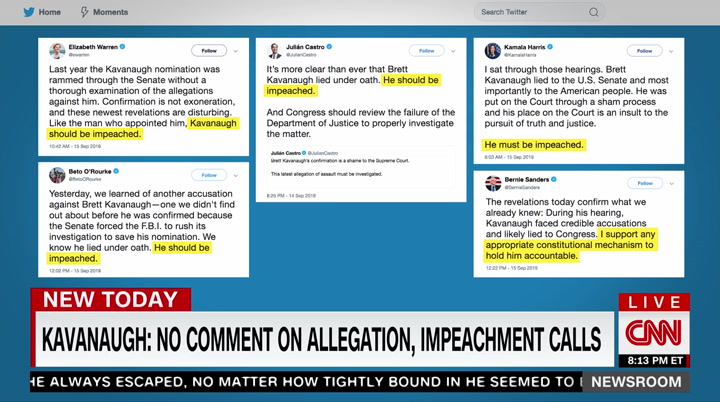 those not quite supporting impeachment, not calling for it outright, bernie sanders as well as amy klobuchar. klobuchar in an interview with abc news today, she said she wants the evidence in the kavanaugh investigation to be released. here's what she said. >> we concern here is that the process was a sham. i don't think you can look at impeachment hearings without getting the documents. the house would have to get the documents and the attorney general is shielding documents. >> so how would all of this work if impeachment were to take place, ana? this has some pregnant. 1805, associate judge samuel chase on the supreme court was impeached by the house. they handed down articles of impeachment. but he was acquitted by the senate. ana? >> okay, kyung lah, appreciate that reporting. thanks so much. let's bring in senior editor at the atlantic and cnn political analyst, ron brownstein, and former justice department spokeswoman under 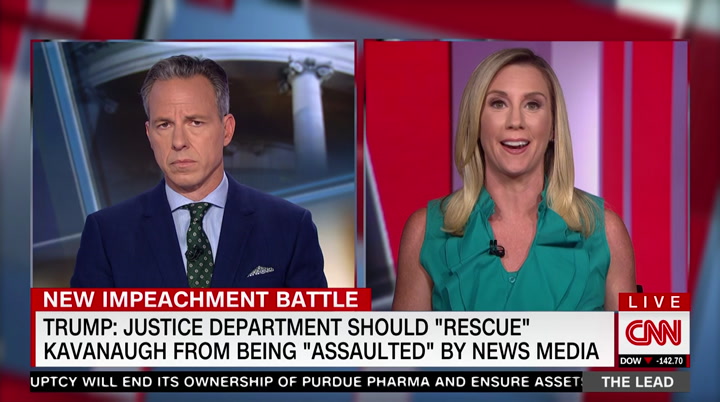 only one justice has ever been impeached way back in 1805 and that justice was never actually removed from the bench by the senate. jake. >> jessica schneider. ron, you know the name -- >> samuel chase. a little trivia. let me start with you. six candidates have called for impeachment and three more would support an investigation into the allegations but to be honest, this -- republicans control the senate, there is no chance that justice kavanaugh would be impeached. >> and the house starting the impeachment, he is too focused on the president to be focused on kavanaugh. this looks like they want to say there was a problem with the process and with the fbi investigation and that they didn't follow up on the claims. and the fact is that that is the case. the reason -- the fact this is coming nout -- coming out now and the fbi didn't look into it, that is what gives it looks, the fbi didn't look into it. 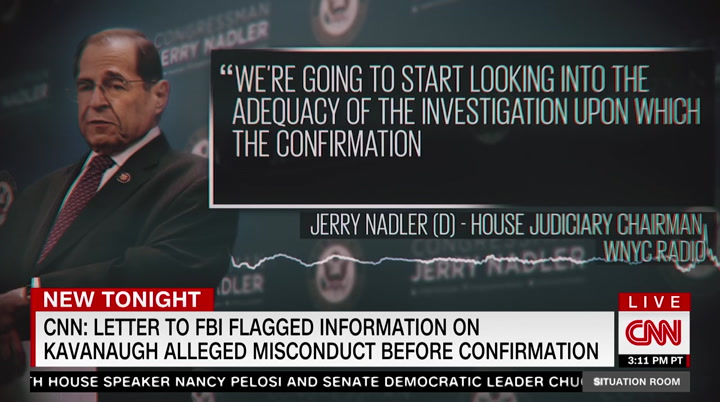 into the adequacy of the investigation, upon which the confirmation was premised, when the fbi director comes before us next month. >> right. >> and the president has asked the doj to come in and rescue kavanaugh, but, of course, the doj is not the personal attorney for the president or any supreme court justice. now, a supreme court spokeswoman said that justice kavanaugh had no comment on the new allegation against him or the calls for impeachment coming from some democratic candidates for president. and wolf, only one justice has ever been impeached. that was way back in 1805, and that justice was never actually removed from the bench by a vote from the senate. wolf? >> all right. jessica, thank you. joining us now, senator richard blumenthal. he's a democrat and serves on the armed services and judiciary committees. i'll talk about justice kavanaugh in a moment. but let's talk about saudi arabia first. have you been fully briefed on what the u.s. knows about this attack against the saudi oil facilities? >> there is a lot more that i want to know. the simple answer is, congress 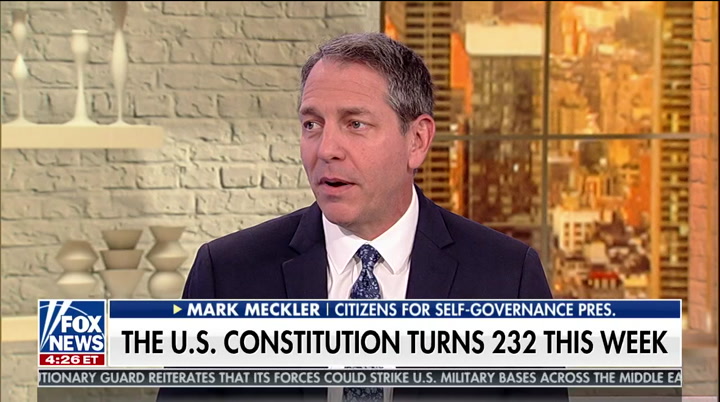 of people who can name all three branches of government, it's still very low at 39%, but it's increasing. >> i think our schools are failing us. what's happening is in the modern era we have so much talk about the constitution, you mention the kavanaugh hearings so we see people paying attention to the branches of government more than in recent history. heather: do you think social media is aiding or hurting? >> it's hard to say. depends what people are paying attention to on social media. a lot of people are carrying around pocket constitutions today. i think that's helping. heather: what do we need to do in terms of the next generation and teaching them the importance of the constitution. >> i think there are a couple things. the main thing, we ought to keep it in schools. this is something we used to do i have a copy of an 1805 constitution printed by the government of massachusetts. all kids were required to reach the declaration, constitution and washington's farewell speech. heather: it's not required

Samuel Chase On The Supreme Court