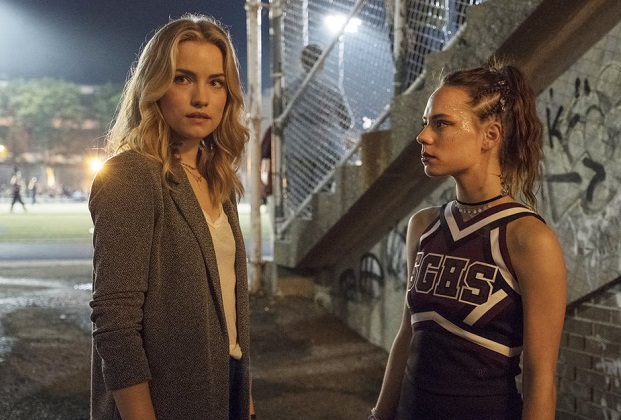 That line of voiceover during the opening minutes of USA Network’s edgy teen mystery drama
Dare Me perfectly sums up the atmosphere of Sunday’s series premiere.
Adapted from the book of the same name by executive producer/writer Megan Abbott, the show is set in the world of a small-town high school cheerleading team, which is rocked by the arrival of new coach Colette French (
Scream: The TV Series‘ Willa Fitzgerald). It’s her words above, as recounted by cheerleader Addy (
The Get Down‘s Herizen Guardiola), that set the tone for the darkness to follow. As Addy’s voiceover tells us, the coach could see past the young girls’ glittery exteriors to the miseries beneath the surface. But most of all, “she could see that we were waiting, had always been waiting, for her. It was f–king beautiful… until it went too far,” Addy’s VO declares as we see her driving, her hands and phone covered in blood.